Things To Do In Roswell, NM

We’re glad that you’re here. Whether this is a quick stop or just Day 1 of your once-in-a-lifetime adventure, you’re going to enjoy your time in Roswell, NM, and that’s guaranteed (following this guide, that is).

Originally a “new visitors’ page” RosGuide is your one-stop shop when looking for things to do in Roswell, NM.

We’ve got the local “skinny” on all the best (4-star minimum) places to eat, tips on great attractions, plus fun activities and must-see local adventures. So whether you’re flying solo or crashing here with the whole family, a long-time local resident or a visiting tourist, you’ve found all the best things to do in Roswell NM right here! “There’s lots to do in Roswell!” It all starts below.

All the things to do in Roswell NM 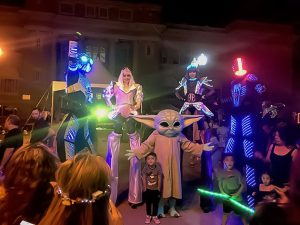 Things To Do In Roswell NM

Our Events Calendar and different things to do in Roswell NM! 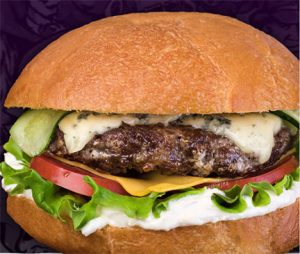 Forget the corporate chains, check out these family-owned places where Roswell locals really like to eat. 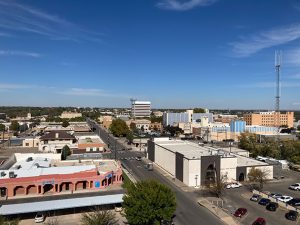 Things To Do And Roswell's History

In 1869, Van C. Smith built two adobe buildings in the desert southwest near the Pecos River. These two structures became the general store and the post office and were the founding buildings of Roswell, NM. Van Smith named the town Roswell after his father, Roswell Smith.

When John Chisum partnered with Oliver Loving and Charles Goodnight to drive cattle across the high plains into the Pecos Valley in 1866, he created the economic engine that grew the small, high-desert community. By right of occupancy Chisum became the largest landowner in the United States for a time, ranching roughly 150 miles worth of territory along the Pecos River and around the Fort Sumner area. Chisum bought the Jingle Bob Ranch (or South Springs Acres Ranch) just south of Roswell and made it his headquarters. Chisum’s cattle drives established much needed commerce. Chisum also led the way for all livestock including a thriving sheep and wool trade.

The railroad through Roswell is on the Chisum Trail, named after John Chisum and the cattle drives which opened a young America to ranching and farming west of the Mississippi.

Water came next. Though the Pecos River was (and is) what desert dwellers call a river, it runs nearly twenty miles to the east of Roswell. There was some surface water in South Springs five miles to the south and the Rio Hondo and Spring River ran through the town and people found adequate shallow water for domestic use. Then, in 1890, Nathan Jaffa drilled a well in his backyard on what is now Richardson Avenue. The well gushed water clean and clear and under pressure. With a good water supply, Roswell developed quickly in all types of agriculture and business.

Shortly after the discovery of an artesian water supply, J.J. Hagerman moved to Roswell and bought the Jingle Bob ranch. Hagerman founded the town of Hagerman and began to develop irrigation systems in the farming region around Roswell. The surface waters of the Rio Hondo, Berrendo Creek and The South Springs River fed the canal along with underground well water. The Hagerman canal is still in use today.

J.J. Hagerman also built railroads. In the late 1800’s, Hagerman built a rail line from Pecos, Texas to Carlsbad, New Mexico. With the discovery of artesian water in Roswell and the surrounding area, Hagerman extended his railway through Roswell and on to Portales. Hagerman also donated the land for the New Mexico Military Institute, founded in 1891 by Colonel Robert S. Goss and Captain Joseph C. Lea.

With the railroads and water, agriculture enjoyed a boom in the Roswell area. John Gill, an apple orchardist, moved to Roswell and began what is now Roswell Seed, one of the oldest family-owned businesses in New Mexico. Gill would step out of the shop’s back door set his pocket watch and in store clock by the train as it chugged by.

You can still see Roswell’s first businesses and their connections to the railway. Large commodity barns pepper the north side of the street right along the railroad. Some of these have been turned into restaurants. Along Virginia you can see Mayes Lumber Company, started in 1933 and still selling hard-to-find lumber. It’s worth a look to step into Mayes Lumber and Roswell Seed. Both businesses show an early Roswell. Roswell Seed’s original seed cabinet and clock are still in use. In the spring at Roswell Seed, you will find the best garden plants, along with baby chicks and even honey-bee set-ups on their way out to hives in the area.

In the early 1900’s, Roswell became known for a delicious, chocolate-covered candy that heralded the holiday season. Roswell 4’s, as they were called, got their name from the candy maker’s signature number 4 loop on top of the candy. You can purchase these little squares of delight at Whitefield Farms or make them yourself. The recipe is online at Cooks.com known as “St. Andrews Fours,” since St. Andrews made them for many years as fund raiser after the candy maker closed his doors.

Robert Goddard moved to Roswell with the financial backing of Harry Guggenheim. In the mid-1930s, Goddard had consulted a meteorologist to learn where to best continue his research. Roswell, NM had a better climate with many more cloudless days. Goddard was able to continue his work on liquid-fueled rocketry with much less risk to people and surroundings. He had access to wide-open spaces, clear skies, and much greater privacy. Roswell was proud of Goddard’s residence and work. Rumor has it that many curious looky-loos were misdirected when seeking to find Goddard’s work or residence. Much of Goddard’s original Roswell workshop was moved intact to the Roswell Museum and Art Center, where looky-loos are most welcome.

The United States military also saw the benefits of land and sunny weather. An army airfield was established in the early 1940s and fully operational prior to the second world war. The airfield trained pilots and experimented with air travel. Walker Air Force Base took its name from the native New Mexican Brig. General Kenneth N. Walker who was lost in a mission over Rabaul, Solomon Islands. Find the Walker Aviation Museum inside the Roswell Air Terminal.

The Works Progress Administration, WPA, funded the block-work of Roswell’s biggest park. Built along the Spring River and named after the pioneer banker E.A. Cahoon, the blockwork steps leading to the riverbed stand sentinel to original water flow. Cahoon Park join’s the Nancy Lopez Golf Course and the J. Kenneth Smith Bird Sanctuary with a path winding through the City from Spring River Zoo to the bird sanctuary. The path passes under Main Street through the riverbed adjacent to rockwork that German POWs added during World War II. This old Iron Cross was covered-over by incensed Roswell citizens, but the concrete those citizens used has long washed away.

The WPA also funded the Roswell Museum and Art Center (located at 1011 N, Richardson) but turned the museum over to the City of Roswell in 1941, when the WPA was restructured. The museum is one of the few remaining art museums constructed under the auspices of the WPA. Visiting the museum, you will find Goddard’s workshop, the largest public collection of Peter Hurd and Henriette Wyeth’s work, WPA muralist Howard Cook, and fine collections of contemporary artists of the region including art from the Artist in Residence program of the museum.

Perhaps for the same reason Robert Goddard came to Roswell, aliens may have visited in the mid-1940s. On July 8, 1947, the Roswell Daily record announced the capture of a flying saucer by the Roswell Army Airfield. Whether the flying saucer was evidence of extra-terrestrial activity on Earth, or it was a weather balloon, continues to be a topic of hot debate throughout the desert southwest and even the world. Roswell now sports a UFO museum and research facility, Roswell Spaceport, and an annual UFO festival.

Roswell’s Spring River Zoo sits on 34 acres of park land. Check for their seasonal openings of the antique wooden horse carousel and the miniature train. Not only can you see a fabulous selection of animals you can picnic at the adjacent park and playground.

Roswell also has a beautiful library with an active staff, a great children’s section, and many programs.

If you are a history buff, don’t forget the Historical Society for Southeast New Mexico at 200 N. Lea Avenue, in the historic Lea Mansion. The building itself is said to be populated by a few friendly spirits.

You will find many interesting day trips in and around the city. The Bitter Lakes National Wildlife Refuge runs along the Pecos River. Bitter Lakes is home to the Dragonfly Festival. Hugging the caprock east of the Pecos sits the Bottomless Lakes State Park. It is one of the oldest state parks in New Mexico. The Salinas Pueblo Ruins are north and west of Roswell, within a three-hour drive. It is a great location for beautiful views and picnicking. There are three locations in the Salinas Pueblo Missions.

Roswell has many events throughout the year. For a sampling consider the Jazz Festival in the Fall, the UFO Festival in the summer, live theater and music at the Roswell Community Little Theatre (the oldest community theater in the state), the Roswell Symphony Orchestra, and at Way, Way Off Broadway.

Whether you are living here or visiting, please enjoy our high-desert community. Yes, there's lots of things to do in Roswell, NM!